This article contains collected information from an unreleased product, and have not been finalized. Do not add anything else, unless you find official information.

Mayday! Zuke! Why are you hijacking NSR's concerts?
―One member of 1010 to Bunk Bed Junction

1010 is a boy band comprising of robots and megastars within NSR, and are the charters of a currently unnamed district who represents synth-pop. With their ally Neon J., they are among the main antagonists and are speculated to be the 5th bosses in No Straight Roads.

All members of 1010 have grey skin and wear black sailor suits with white highlights, and colored glowing lights on their cheeks and colored ties. Each has his unique hairstyle, eye shape, eyebrows, and color scheme.

The fight took placed on a navy ship, 1010 blast lasers, they can sometimes protect themselves with force fields, they can dash into different places. Once one of the members is destroyed, Neon J. will come down and rebuild them.

1010 were judging Mayday and Zuke for their rock music performance, which they find it outlandish for the Lights Up Auditions. 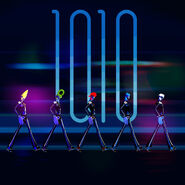 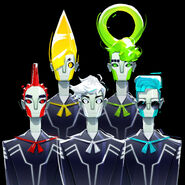 Add a photo to this gallery

Retrieved from "https://nsr-wikia.fandom.com/wiki/1010?oldid=1881"
Community content is available under CC-BY-SA unless otherwise noted.