DJ Subatomic Supernova (abbreviated to DJSS) is a space-themed Disc Jockey (DJ), one of the megastars in NSR, and the charter of Cast Tech District who represents deep disco. He is one of the main antagonists and the 1st boss in No Straight Roads.

DJSS has a modern, futuristic appearance, his most notable trait being his sphere-shaped helmet that appears to contain a part of space itself.

He wears a three-toned blue hoodie with the hood up, which has the solar system embedded into an animation, and glows white on the inside. On top of the hood, he wears blue headphones. His hands are covered by dark-blue gloves, with a white glowing line going down the middle- and ring finger on his left glove. On the bottom half of his body, he wears blue board shorts and light-blue sneakers.

Despite his futuristic appearance, DJSS appears to have unshaved human legs. It is as of yet unclear if he is a cyborg, an extraterrestrial or a human.

Overall, DJ Subatomic Supernova has a futuristic galaxy theme. This extends to his brands, advertisements, and his concert location, Club Planetarium. A hidden motif within Supernova's character is the true, monotonous nature of space. This is seen during his final boss phase, when his helmet cracks opens and unleashes a black hole.

DJ Subatomic Supernova is a deeply self-important and self-centered person. He does not care about the small details and is quick to dismiss Bunk Bed Junction when they arrive to crash his concert, already having forgotten who they are despite having seen them perform in front of him and his fellow artists earlier that night.

His dismissive attitude also reaches his allies, as he insults one of the people in charge with launching the NSR Satellite, stating that it is "not rocket science", before hanging up and immediately complaining about his ice pop having melted and ordering someone to fetch a new one. DJSS comes off as a busy and bossy rich man.

In Cassette Tape #1, DJSS can be heard giving a speech to a grand audience of three, excluding the janitor. The speech is long-winded and only concerns himself and his plan to have his music to travel the farthest corners of the galaxy. DJSS acts as if he is the center of everything, and speaks in a grandiose, exaggerated manner about the vastness of space and the multitudes of stars it contains.

"NSR? Maybe. My music? Highly unlikely."
―DJ Subatomic Supernova, to Bunk Bed Junction
Not much has been shown yet about DJSS' relation to NSR, however he does not seem to care much about the company or the other megastars as long as his plans succeed. It can be inferred that he considers them a stepping stone to his goals.

"Your intellect is strikingly shallow, as everyone else's is. What I'm saying is that you Plutonians are no longer relevant."
―DJ Subatomic Supernova, to Bunk Bed Junction
To the DJ, Bunk Bed Junction is as interesting as the dwarf planet, Pluto. DJSS calls Mayday and Zuke "Plutonians", because of their irrelevance to him. It refers to Pluto being absent on the embedded animation of the Solar System on his hoodie, showing how insignificant it is. He also considers both of them way below his intelligence, though Zuke understood the DJ's insult.

"I am done stooping to your level of idiocy!"
―DJ Subatomic Supernova, to Bunk Bed Junction

DJSS is on a suspended platform with his turntable and has disco balls orbiting around him. He will make one or two of them to dash to strike the player when he scratches on the turntable. If you hit the disco balls multiple times, they will drop ammo notes to shoot him with.

In Crazy Mode, all four disco balls will be spun and in random directions: clockwise or counterclockwise. Two of the disco balls will glow purple, and can be parried. This attack also occurs at an increased frequency, and will be used whenever he has an opportunity. This applies to all phases except the final phase. All incoming attacks will hit for substantially more damage thanks to the game's hardest difficulty.

After you deplete DJSS' health, he will turn the inside of Club Planetarium into the Solar System, the disco balls now becoming planets, and him in the center with an asteroid belt around him. Like Phase 1, DJSS will make the planets dash, but he will clap causing the planet to be hazardous, and he can slam his hands down to cause the asteroids to launch out of the belt and target the player.

The slam attack uses twice the amount of asteroids in the belt, only in Crazy Mode.

After Phase 2, a distraught DJSS will pick up a miniature Earth and poke it, a huge version of his own hand descending from the sky, poking him and turning him into a spaghetti-armed giant in the middle of space. Phase 3 is similar to previous phases, except the planets become neon and colorful, and a Neutron Star laser will rotate around him that the player will have to avoid. The slam attack will instead hurl a wall of asteroids forward, causing damage if caught in its path. He will also directly lash out at the player, as well as hammer his hand onto the platform. Occasionally, DJSS will pull Mayday and Zuke into a 2D format of the platform in which the orbits change angles and they have to avoid getting hit by three out of the four planets sent crashing by following the rhythm.

In Crazy Mode, the slam attack will use up a much bigger chunk of the asteroid belt. The 2D platform segment will also use all four planets.

Once DJSS' health is depleted in Phase 3, his helmet cracks open and begins to release a black hole. Club Planetarium transforms into the event horizon, with a "straight road" leading to it and lights flashing in the background as the black hole sucks up everything. Planets that glow purple dash towards the hole and must be parried. If a player decides to dodge instead, the planet will do damage once it crashes into DJSS. Once DJSS' health is completely empty, Mayday and Zuke will use "Showstopper" to end the battle and send him flying to space.

None of the planets will glow purple and must be dodged rhythmically, according to Crazy Mode.

DJSS, together with Tatiana and the other NSR megastars, were the judges at the Lights Up Audition and disqualified Mayday and Zuke for performing Rock music. DJSS was the second judge after Yinu to disqualify them. After Tatiana banned Rock from future auditions, Mayday and Zuke head to Club Planetarium.

DJ Subatomic Supernova, during his concert at Club Planetarium, is seen having an argument about a satellite over a phone call. Once the call ends, he complains about his Mr. Dodo Ice Pop having melted. As Bunk Bed Junction barge into Club Planetarium without permission or a "VIP privilege card", he is startled and challenges them, leading to the boss battle. DJSS then proceeds to battle the duo with his turntables. After they crack his helmet, a black hole leaks out. Mayday and Zuke use "Showstopper" to end the battle and DJSS is sent flying off to space.

After his defeat, Mayday and Zuke watch on TV as a news anchor for Vinyl City Report informs that DJSS had been supervising the launch of an NSR Satellite. The launch turns out successful. 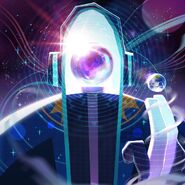 DJSS during the 3rd phase, when he appears as a "spaghetti-armed giant"

Zuke's "One With The Universe" mod.

DJ Subatomic Supernova's "Cassette Tape #1", feat. DJSS holding a speech about his plans.
Add a photo to this gallery
​​​​​

Retrieved from "https://nsr-wikia.fandom.com/wiki/DJ_Subatomic_Supernova?oldid=1873"
Community content is available under CC-BY-SA unless otherwise noted.