Start a Wiki
This article contains collected information from an unreleased product, and have not been finalized. Do not add anything else, unless you find official information.

"This pedestrian girl you chose is a mistake. She is fire. Fire and sea do not mix."
―Eve, to Zuke, referring to him parterning with Mayday

Eve is a mysterious diva, one of the megastars in NSR, and the charter of a currently unnamed district who represents art-pop. She is one of the main antagonists and speculated to be the 6th boss in No Straight Roads.

Eve's physical appearance is a slim, tall woman, born with pale light blue eyes. Her long, golden-orange hair covers her left eye as the bottom half of it ravels her left leg. Her right half of her body is colored white, with her fingernails painted velvet red and her leg boring a teal platform boot. The other half is velvet red with her left leg wearing a platform sandal. Eve wears turquoise beaded bracelets, addition to her left wrist having two bracelets unlike her opposite wrist; an earring on her left ear, a head ornament all around her forehead, and three thin golden chokers on her neck. Eve's costume is a black chest-less leotard with a teal breast cover on the right, and a chartreuse breast cover on the left. Her scruffy cloak is teal, decorated with chartreuse leaves, a yellow cube, thick violet-purple strings, and spheres coated in colors of velvet pink, orange, and white.

Her character thematic forms into minimalistic and illusionist art, as Eve's museum consists of her self-portraits (each in different color schemes), and movable sculptures. The other side of art may be scary if it is analyzed deeper.

Eve's fight seems to have her dancing around while hands come out and would shoot eyes at the player she even separated Mayday & Zuke before the fight & can teleport to either Mayday or Zuke's location.

It's unknown why Eve is strongly against Mayday, because of her partnership with Zuke. 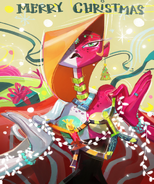 Eve's updated character art.
Add a photo to this gallery

One of Eve's masterpieces?
Add a photo to this gallery

Retrieved from "https://nsr-wikia.fandom.com/wiki/Eve?oldid=1883"
Community content is available under CC-BY-SA unless otherwise noted.