Sayu is a virtual idol created, programmed, and animated by a group of four adolescents, named Remi, Tila, Dodo, and Sofa, is one of the megastars in NSR, and the charter of Akusuka District who is the representative of cutecore. She is one of the main antagonists and is the 2nd boss in No Straight Roads.

Sayu is a digial character in the form of a singing mermaid. Due to her cute and bubbly character, she's highly popular among the geek community and famous with younger audiences. She was created by four young creative kids. They are:

Sayu's caricature is a pink-skinned young woman whose pupils are cyan hearts and whose eyebrows are three dark fuchsia dots. She has short and wavy, platinum white hair with magenta streaks, a lemon yellow fore tuff, and cyan floating pearls at the ends of her hair. Her tube top and short handcuffs have cyan highlights, and her tail has cyan, fuchsia, and yellow additions. Her fin at the end of her tail is pink. One of her prominent features is her ahoge, which is shared by her lead artist, Remi. What's even prominent as the rest of her facial features is that she lacks a nose, compared to any character

At the second phase of the battle, Sayu's appearance has been drastically remodeled. She has fuchsia hearts with cyan highlights as outside strokes and central pupils. Sayu gains two cyan dots above her eyes that act like her eyebrows, while other sets are below her eyes. Her hair is wider than her previous incarnation, and bore fuchsia and cyan streaks on both the front and back of her hair. Her hair has a yellow strand of hair with a light cyan gradient on the bottom. Her tube top has a magenta-pale mauve gradient, and her handcuffs are slightly longer with pale cyan and mauve gradients. As a mermaid, Sayu's tail has a gradient from cyan to magenta. Her Pyun Pyun Trident is lemon yellow with three, small and different shapes: a magenta sphere, a blue triangular prism, and a purple cube. Interestingly, her trident is designed to be based on a USB drive, which is part of one of the visual themes of the ocean and digital technology.

She is most often seen smiling inside and outside of performances. She is actually a giant robot piloted by the four creators.

Sayu's characteristic theme is the ocean and the reef, as she is designed as a mermaid. Her battle stage is actually a digitalized format of the ocean, meaning that everything around this stage is fantastical and pleasing. On the other side, Sayu and her digital world are harmful, once Bunk Bed Junction are able to battle her. Sayu's malfunctions and her final form, a reverse mermaid, is the cause of the negative traits of her digital world.

Sayu's first viewable early design has long, velvety fuchsia hair, while the rest of her clothes and tail is mainly white. She has a large crown on top of her head.

It's hard to see what her early in-game model looks like in the Welcome to Vinyl City trailer, but Sayu's hair has a cyan fore-tuff, fleshy-pink skin, and what presumed to be her pink eyes. The entirety of her clothing is just tints and intensities of pink.

Sayu's basic character is bubbly, friendly and cheerful. She peppers references to the ocean, fish, and water in her speech and in her singing, and she frequently repeats the catchphrase "Love Love Sayu Pyun!", as well as the onomatopoiea "Pyun". She has a strong belief in the power of love.

According to Zuke, Sayu is famous with younger audiences, presumably in a range from children to adolescents.

Until they battle her and make her creators panic, Sayu doesn't seem to have any actual animosity towards Bunk Bed Junction outside of rejecting them as NSR artist and trying to make them submit to NSR's domination of Vinyl City. She believes that Zuke and Mayday have romantic feelings for each other, a sentiment which both deny. While Zuke seems more neutral to Sayu, Mayday's feelings about her are at opposite extremes: while she has no compunctions about calling Sayu "not real" and mocking her as a fictional character, Mayday is also attracted to Sayu when she turns into her second phase form, calling her cute with hearts in her eyes, and is visibly and vocally disgusted when Sayu becomes a human-legged fish, scolding her creators and telling them to "never turn Sayu into that thing ever again".

"Why hate when we can love? Love is the most powerful power in the world!"
―Sayu, to Mayday

"Sayu is remotely controlled by her creators. Each member handles a specific portion of Sayu, giving her unique abilities based on their specialties. The only way to contest her is to cut the connection between Sayu and her creators. Only then will you have the fighting chance to beat the Digital Idol."

Once you reach Sayu (in her original design), she will alter her appearance and swim away from platform to platform. The player will have to chase her around the platforms while avoiding electrical eels to reach her.

After the first phase is cleared, Sayu summons her Pyun Pyun trident. She will fire redfish arrows from above if you, the player, attempt to generate a rail. She goes platform-hopping each time a music rail is brought up. The platform from the left is Sayu's vocal performance, while the right is her motion capture. Destroy both of its barrier chips that are shielding the character design chip then destroy it to move onto the third phase.

Phase 3 will have Sayu changing her appearance again, but more overwhelming than her previous designs. Use the music rail Generator to go deeper into the arena. During this phase, Sofa's mouse cursor will try to slash at the player. The platform on the right next to the vocal performance is Sayu's video editing.

After destroying the character design barrier, Sayu's creators will start to panic as she'll start to glitch out and become angry. The player must retrace their steps through the arena and head up to the platforms at the beginning of the battle.

Sayu's creators will start to combine all of their skills together and transform her into a reverse mermaid. Sayu will slam her legs, which will create a tidal wave, kick a red orb at the player, and fire 3 beams at them. The player must use note ammo and fire at the 3 barrier chips in order to destroy the final chip. Once her health is completely empty, Mayday and Zuke will use "Showstopper" to finally defeat Sayu.

There's little information about Sayu's origin, other than being created by a creative quartet who works for NSR.

Sayu is one of the NSR artists who are judges for Mayday and Zuke, who are dismissed for their performance of rock music.

An update of Sayu's concept art since 2019, with her actual appearance, but with minor additions to her design.
Add a photo to this gallery

Sayu's appearance as in the TGS 2019 trailer 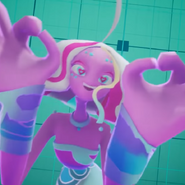 Sayu's second form in the Rock Rebellion trailer has lighting dimmer and her cyan eye highlights more saturated, compared to the one in the final version of the game.

A sneak peek of Sayu and her stage close to final rendering, in promotion for Guerilla Collective. Note that here heart eyes do not have glowing white centers.
Add a photo to this gallery

The creators behind Sayu using all their skills together

Sayu, in her third form, angry, when her creators panic 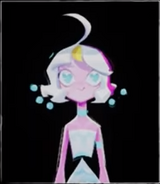 Sayu's portrait in her briefing
Add a photo to this gallery

Retrieved from "https://nsr-wikia.fandom.com/wiki/Sayu?oldid=1864"
Community content is available under CC-BY-SA unless otherwise noted.