Start a Wiki
This article contains collected information from an unreleased product, and have not been finalized. Do not add anything else, unless you find official information.

The Golden Maestro of Vinyl City

EDM (A fusion of Classical Piano Music and Dubstep)

no older than 10 years old

"I'll show you why they call me the Golden Maestro of Vinyl City!"
―Yinu, to Bunk Bed Junction

Yinu, aliased as The Golden Maestro of Vinyl City, is a child pianist prodigy, one of the megastars in NSR, and the charter Natura District who represents classical music with a blend of dubstep. Yinu, with the aid of her mother, is one of the main antagonists and is speculated to be the 4th boss in No Straight Roads.

Yinu's physical traits include pinkish-red eyes with little glimmers, red blush cheek marks, an apricot skin tone, and golden, curly, rose-shaped locks. One of her most noticeable features is her yellow leaf-shaped mark that is placed from her nose through her head. Her signature clothing is a white formal top suit, orange pants with red, swirl-studded highlights, and a red ribbon bow on her top. As a child, she has a crooked tooth on her top left teeth, and the other on her bottom right.

Yinu's motif design is based on the environment of nature, hence her golden hair resembles a rose bush, and her white signature piano has a leaf-shaped lid. Her advertisement and possessions in Vinyl City also fit her physical motif. Compared to Yinu, who represents the innocent side of nature, is her mother, who symbolizes the frightening image of nature.

Her eye glimmers and small gaps on her top left and bottom right teeth do not make an appearance on the game's 2018 and 2019 demos and promos.

Yinu is a young child, and has an innocent personality. In her trailer for the release of NSR, she seems to have little filter, questioning why she is "in a forest" when presented playing in a forested environment, and telling the male voice presenter that she needs to use the toilet. Like any child her age, she nicknames belongings and toys, citing three of her possessions as "Alice, Puddles, and General Stragovich".

Yinu is supremely confident in her skills as a pianist, and becomes offended when Bunk Bed Junction insult her, "schooling" them by playing a speedy and complex piece that showcases the true beauty of classical music. Unlike the other NSR artists, she herself does not perform EDM; her mother is the representative of NSR's EDM focus during their battle, while Yinu simply plays piano. As her boss battle progresses, Yinu becomes progressively more worried and frightened, relying on her mother to protect her while she is forced to continue playing her piano.

While she loves her mother deeply and calls her "Mama", Yinu is also stifled by her mother's overprotective, controlling behavior. She becomes distressed as her mother grows angrier at Bunk Bed Junction for ruining Yinu's recital.

Like any other NSR artist, Yinu dislikes Bunk Bed Junction for crashing her performance, commenting that they "are only good at breaking stuff". They in return mock her skills as a pianist and deliberately mishear her when confronting Yinu in her concert hall, seemingly getting a kick out of making fun of her.

"Stay away from my piano!"
―Yinu, to Bunk Bed Junction
Yinu doesn't have a health bar like the other bosses. she'll shoot out bouncing eighth notes and fast bouncing single bar notes. she'll even rapidly shoots out the Single Bar Note when Solo.

The final phase has not yet been confirmed, but concept art hints that she seems to play the piano in silhouette form.

“I wanted to capture the innocence and loneliness of our child prodigy. [...] The back-lighting and grand stage dwarfs our little pianist, amplifying her ‘smallness’ and isolation.
As you move closer, you’ll see a hand lifting her up. This is part of her story arc, where she is still being controlled by a higher authority. Shadows and an air of mystery is what I’m going for here, thus the simple use of lights and focus.”
―Ellie Yong, concept artist
Growing up with her mother, Yinu becomes an amazingly talented pianist at a very young age, gaining 6 international BAKAT awards. We do believe that three of her BAKAT awards are named Alice, Puddles, and General Stragovich. Meanwhile, she was enrolled to be one of the most prominent artists in NSR; with her piano talents combined with its EDM element: dubstep.

Yinu, along with Tatiana and the other NSR artists, are judges towards Bunk Bed Junction (Mayday and Zuke) at the Lights Up Audition. They've dismissed them because rock is overshadowed by EDM.

Meanwhile, Yinu held her concert at Natura Concert Hall, until Mayday and Zuke interrupt her performance. They caused her mother to emerge out of the curtains and to attempt to extinguish them. As Yinu was directly attacked by Bunk Bed Junction for the last time, the mother then uncontrollably snapped at them, distraught at her daughter being hurt. 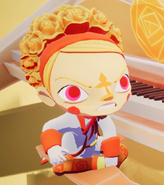 Yinu's old in-game design, as first seen in the Mother and Child demo

Yinu's updated model, as in PAX East 2020, but her eye glimmers are placed near corners of her pupils
Add a photo to this gallery

Retrieved from "https://nsr-wikia.fandom.com/wiki/Yinu?oldid=1866"
Community content is available under CC-BY-SA unless otherwise noted.